... bringing choice to breeders in Australia and New Zealand

There are 3 services (of 2 doses each) of Limp Bizkit in AUS as at 09-12-21.
NZ has slightly more stock remaining at the moment.

Please also see his sire Cayanosch's web page for details of Limp Bizkit's sire line (click on Cayanosch's name to be taken to his page).

Frozen semen foal born in Switzerland, and the mare is back in foal by frozen semen.

A lovely freshly hatched roan filly by Limp Bizkit
- with 4 perfect matching socks and a blaze.

If more than 1 pregnancy is achieved, there will be an additional service fee payable
on confirmation of each 45 day pregnancy

Shipped in Australia from Gene Movers in VIC, and Equibreed in New Zealand

Limp Bizkit as a 2yo young stallion

Roaning is a term used to describe horse colour, where a horse’s body coat consists of white hair intermingled with another base colour.  The Roan gene is dominant in phenotype ie it is always visible when it is present.

Roan foals are already born with this pattern, but it is often not seen in the foal skin and is only visible after the first foal coat change.

RARITY OF HORSES IN THIS COLOR

There are only a small number of roans in all of the equestrian centers around the world.
In Germany, the number (as of 2015) of Roan horses is estimated to be at most 50 horses.
As at 2017 there are less than 10 active broodmares in this color.

In 1935, a Trakehner mare Insterburg was born.  She is the foundation mare for today's roan horses within the German Warmblood lines. Insterburg came from the East Prussian breeding of Freiherrn to Schrotter.

Insterburg's daughter Insterfreude brought forth the famous stallion Insterfeuer, a Red Roan, who was licensed in Krefeld in 1971 and was then stationed at the Vogelsanghof in the Rhineland near Gottfried Hoogen. In 1979 Insterfeuer went to Austria and disappeared from the breeding scene.

A licensed son of the Insterfeuer was the Blue-Roan stallion Bukephalos, which however in Germany little breeders employment and 1991 was sold to Canada.

Also from the stud farm Moorenmühle the stallion Lando was licensed in 2014, descended from the thoroughbred Aladin Dancer xx (USA) and Lily my Love v. Hofrat (Trak.).

Until Limp Bizkit's birth, these two Moorenmuhle stallions were the only roan stallions available in Germany. 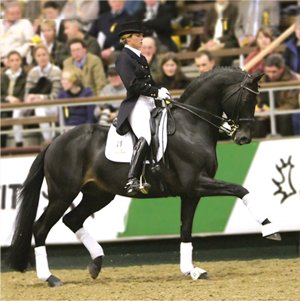 Hofrat is a son of international Grand Prix stallion, EH Gribaldi, who won his approval in 1995 and is a KWPN keur stallion.

Great grandsire Enrico Caruso stands for performances and rideability and his offsprin have been regulars atop the USDF stallion rankings.

Hofrat's dam is by Guter Planet, he a son of EH Consul. She also produced the Reserve Champion Hoftaenzer.

For five years Hofrat has been rated in the top 1% of all German sires on the FN.

In 2005 he produced the Körungssieger and the most expensive Stallion from Verden. Hofrat's son, Hotline, won the Danish National Championship in 2008 and in 2009 he won the qualifier with a score of 9.45, finishing up as Danish Reserve Champion.

In 2010 he went on to win several advanced dressage classes.

Like Hofrat, he sires horses with great willingness to work, great paces and great beauty.

On the 2014 WBFSH list of dressage sires, Hofrat's sire Gribaldi is ranked at the top.

Great grandsire Enrico Caruso stands for performances and rideability and his offspring have been regulars atop the USDF stallion rankings.  Hofrat's dam produced the reserve champion stallion Hoftaenzer.

Gribaldi is out of a mare by Ibikus, a successful sire in Germany and then in Denmark – and has another cross of the same stallion on his sire’s dam line. Ibikus – like Kostolany – stood at the stud of Otto Langels, and he rode the stallion to the title Champion Riding Horse at Wiesbaden and Hamburg.

Dutch stallion owners Mr de Jong and Joop van Uytert purchased Gribaldi after he had been proclaimed champion at the 1995 Trakehner Licensing in Neumünster. Standing in Holland, Gribaldi was approved for the KWPN, Oldenburg and the Danish Warmblood society. He benefitted from a massive and glossy advertising and publicity campaign – although his progeny were also doing a pretty good job of promoting him at the same time with many of them starring in young horse classes.

Gribaldi was also doing his bit, at the age of four he won the stallion class in s’Hertogenbosch and took reserve champion honours in the Pavo Cup for four-year-old dressage horses. Later he was competing at Grand Prix level with Edward Gal with considerable success. The combination won the 2004 Zwolle International Stallion Show Kür with 73.70% and the Kür at the CHIO Rotterdam.

Gribaldi was proclaimed Elite Stallion by the Trakehner society in 2003 and in 2005, based on the performance of his 6- and 7-year old offspring, the KWPN decided to proclaim Gribaldi a Keur Stallion. In order to become a KWPN Keur stallion, a sire has to have a sport index of more than 140 points with a reliability of 75%, and has to be passing superior conformation on to the offspring. In 2008 Gribaldi was proclaimed Trakehner stallion of the year.

At the time of his death in 2010, there were 707 KWPN registered Gribaldi mares, over 300 of which had received the ster predicate.

The Farewell to the wonderful stallion Gribaldi, in 2010.

Cayanosch is a specialist jumping-bred warmblood stallion with the additional benefit of a roan coat.

He has a wonderful jumping style, huge scopiness and excellent temperament.

All of Cayanosch's breeding and lines are shown on his page

Cayanosch impressed the judges at his stallion licensing with his enormous jumping ability and powerful ground covering canter. A remarkable stallion with a promising career ahead of him in jumping.

He is genetically tested EE N / Rn, which means there is a 50% probability of a roan foal, and he will never produce a chestnut foal.

Cayanosh is a substantial stallion of good height (17h), bone and substance of body, with correct, quality limbs and good conformation overall. His legs are long which he uses well and demonstrates good rhythm and balance in all three gaits. His hooves are regular, hardy and well-shaped.

Cayanosch has a well balanced outlook on life, bold, confident with a willing and trainable work ethic.

His sire Castellini (Contender x Landgraf) approved by Holstein and most of the major German stud books was a son of one of the most influential jumping and sporthorse sires of all time, Contender.

Cayanosch cannot produce chestnut foals, and has a 50% chance of passing his unique true roan colouring to his offspring.

His foals are long-legged, with distinguished and noble heads and of substantial body and height. They move with power and good balance.